I was thrilled to hear that a new film version of Geoffrey Household’s classic thriller Rogue Male is to be made, starring Benedict Cumberbatch. I look forward to it but do hope they stay faithful to the book.

I blogged Rogue Male a while age. Here are my thoughts: 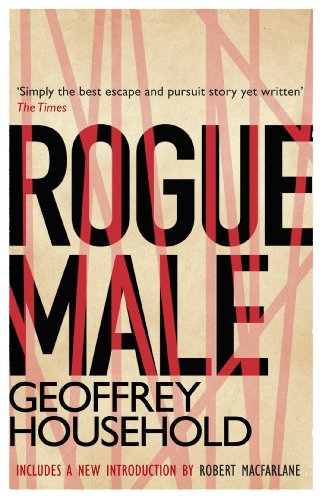 Geoffrey Household’s “Rogue Male” has always been one of my favourite thrillers. I’ve read it countless times, not just for the exciting story but for Household’s wonderful descriptions of the countryside.

It jostles in position with John Buchan’s “The Thirty-Nine Steps”, as the greatest chase thriller ever written.

The novel was first published in 1939 on the eve of World War Two, and was immediately popular. Household wrote some memorable and very readable novels afterwards – many with a chase theme – but never quite again touched the greatness of “Rogue Male”, though all of his books are worth seeking out.

The tale of a man who flees to the lonely countryside of Dorset after an attempt to kill an unnamed dictator, in point of fact Adolf Hitler, is gripping and a real page-turner. Even after all my many reads I never want to tear myself away when I pick up the volume once more.

As a fugitive the hero crosses Germany to reach England. There are memorable chapters in a very threatening and sinister London, and a long section set in Dorset.

Household, like Buchan, is particularly brilliant at giving a sense of place. For a thriller there are some quite beautiful portraits of landscape: the long reaches of the Wessex hillsides with their ridge-paths and hollow ways, the forests and rivers of Bavaria, the rural towns where danger lurks.

And the people encountered are realistic too. A shrinking dissident trying to survive in the Nazi state, the farmers of the Westcountry, a merchant navy sailor, shopkeepers, working people on holiday. Every single one beautifully drawn.

And a memorable villain, which to me is a requirement of all good thrillers.

Household really gets over what it’s like to be the subject of a manhunt. The fear and often sheer desperation and tiredness that drives you on and on. The need to cross ground without being observed. The knowledge of when to lie low and when to move on. When to go to earth – which the hero of “Rogue Male” does, literally.

If you’ve ever had to cross country without being seen you’ll know the veracity of Household’s treatment of the theme. Few writers have captured these feelings of escape and evasion quite so well as Household does. And in a writing style that is not only literate but quite beautiful in its descriptions.

There is now a splendid new edition of “Rogue Male” available with a perceptive introduction by the writer and landscape interpreter Robert MacFarlane. I commend it to you. MacFarlane describes an expedition he made with the late Roger Deakin into the depths of the Dorset countryside, in search of Household’s locations.

MacFarlane does an excellent job, whether writing about the tropes of the chase thriller or the countryside that provides the setting of “Rogue Male”. This novel benefits from having an introduction by a writer who loves the English countryside as much as Geoffrey Household clearly did.

I’ve tramped these same places myself and lived rough alongside the ancient paths and hollow ways of Dorset, often for weeks on end. I often used to take my own battered old edition of “Rogue Male” with me, and read it as the dusk fell and the owls began to call.
Fortunately, I never had the Gestapo on my trail.

“Rogue Male” is the hallmark against which all good thrillers should be tested.