Agatha Christie’s The Body in the Library

Colonel and Mrs Bantry had always believed that ‘a body in the library’ only happened in books. 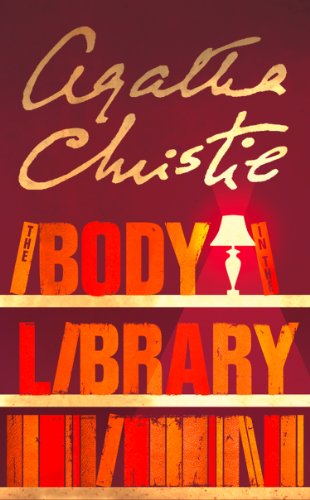 This novel is the second outing for Miss Marple. Though published in 1942 – the first of two that year – it contains no reference to the War until a single mention near the end. Life in St Mary Mead is unchanged – apart from the racy young man, connected with films, who has taken ‘Mr Booker’s new house’ – until a body is discovered at Gossington Hall. A platinum blonde is lying strangled on the bearskin hearthrug and none of the household has ever seen her before.

Fortunately, Dolly Bantry immediately sends the car for her friend Jane Marple. There’s a lovely moment where Mrs Bantry leans on the local constable guarding the library, so Miss Marple can view the corpse before the arrival of Inspector Slack.

“There was the sound of a car scrunching on the gravel outside. Constable Palk said with urgency:

‘That’ll be the Inspector…’

True to his ingrained belief that the gentry didn’t let you down, Mrs Bantry immediately moved to the door. Miss Marple followed her. Mrs Bantry said:

Colonel and Mrs Bantry are lovable characters in a very English upper-class tradition; prominent in village life, the Colonel, a magistrate and friend of the Chief Constable. At first Mrs Bantry finds the mystery exciting. She says to Miss Marple:

“What I feel is that if one has got to have a murder actually happening in one’s house, one might as well enjoy it, if you know what I mean. That’s why I want you to come and help me find out who did it and unravel the mystery and all that. It really is rather thrilling, isn’t it?”

However, both ladies know that if the murderer is never found, gossips will always think the dead girl was involved with Colonel Bantry and his reputation and peace of mind will never recover. The village rumour mill begins at once. I like the way Agatha Christie inserts some very funny lines at this point, contrasting with the underlying seriousness. Christie has often been criticised for writing underdeveloped stock characters. I disagree, feeling she had a great ability to sum up a character in a throwaway line or two.

“Miss Wetherby, a long-nosed, acidulated spinster, was the first to spread the intoxicating information.”

“’His poor wife.’ Miss Hartnell tried to disguise her deep and ardent pleasure… She had a deep bass voice and visited the poor indefatigably, however hard they tried to avoid her ministrations.”

Christie tells us all we need to know. Her skill reminds me of an artist dashing off lightning sketches. A great example of ‘less is more.’

The action soon shifts to the Majestic Hotel in the resort of Danemouth, about eighteen miles away. This part of the novel has lots of interesting social detail about pre-war stays in splendid seaside hotels – a popular trope in Golden Age crime fiction and one I particularly enjoy. This world would have been very familiar to Agatha Christie from her upbringing in Torquay. It is very like the setting of Dorothy L. Sayers’ Have His Carcase. In fact, Christie seems to be gently sending up the widespread fascination with crime, both fictional and true. (This certainly hasn’t dated). At one point a small boy says to the Superintendent:

“Do you like detective stories? I do. I read them all, and I’ve got autographs from Dorothy Sayers and Agatha Christie and Dickson Carr and H.C. Bailey. Will the murder be in the papers?”

There are also remarks in passing about the real-life Rouse case and the Brighton trunk murders, unusual for Christie, as far as I recall.

Despite the humour and attractive settings, Agatha Christie never loses sight of the fact that the theme is murder. She makes the reader aware that the story isn’t just an intriguing puzzle. The stakes couldn’t be higher. Someone evil must be caught and hanged. An innocent man must be saved from having his good name destroyed and being shunned. In fact, Colonel Bantry’s plight is horribly relevant today with the current fashion for ordeal by tabloid.

The solution to the mystery is classic Christie with a well-reasoned motive and a callous murderer. This is Agatha Christie at her finest with trademark twist and superb understanding of human nature in a vivid period setting. All this in only 154 pages. Highly recommended.

9 responses to “Agatha Christie’s The Body in the Library”