Hide In The Dark by Frances Noyes Hart

An American seasonal mystery this week, published in 1929 and set a year earlier on Hallowe’en. Hide In The Dark is the first novel I’ve read by Frances Noyes Hart (1890-1943) and I enjoyed it enormously. 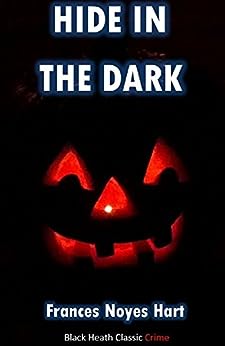 Thirteen people are gathered at Lady Court, an old house, some forty miles south of Washington. The house has been owned by the family of their hostess, Lindy, for over two hundred years, though not lived in – except by a servant – for the last fifty. Lady Court is supposedly haunted by an ancestor who committed murder.

Eleven of the characters are old college friends, a group who called themselves ‘The Mad March Hares,’ the remaining two are spouses. The group haven’t been all together for nearly a decade. They’re still haunted by the suicide of their twelfth friend, Sunny, who drowned herself when she was nineteen.

The novel begins as they arrive for a Hallowe’en house-party. The idea is to recall happy occasions spent there many years ago. They bring hampers of food for three days and the caretaker servant has been sent away. As night falls, Lindy recounts the story of the murder for the benefit of their new guests. In the best tradition of Hallowe’en tales, the weather worsens with lashing rain and a great storm. A river floods, sweeping away a bridge and cutting off the house. They find the telephone is no longer working.

The group play traditional games such as ‘apple-bobbing’ and ‘flour and ring’. Over the course of the evening, old friends catch up, secrets are disclosed, hidden enmities surface. The author does a wonderful job of building a darkening atmosphere beneath the high jinks and a sense of growing danger. This culminates at midnight when they play ‘hide in the dark,’ – more often known as ‘sardines’ in the U.K – and one of them is murdered.

Unable to get help, the friends question one another and try to work out whodunit. It turns out that several had a motive to kill the victim.

Hide In The Dark is beautifully written. Initially, I wondered if thirteen suspects might be a lot to get straight but soon found the author created clearly delineated characters. They are very believable of their period, it was easy to get to know them and care what happens. Frances Noyes Hart also included a cast list, a popular device in Golden Age fiction.

The novel has a lot of quick-fire dialogue and I kept ‘seeing’ the scenes as a black and white film, the sort that would star Bette Davis and George Brent, say. I think Hitchcock might have enjoyed directing this. It has a well-crafted blend of fun and malice.

Hide In The Dark builds to an abrupt, though very satisfying conclusion. It’s been an interesting change to read an American take on a classic mystery plot and I look forward to trying more from Frances Noyes Hart.

One response to “Hide In The Dark by Frances Noyes Hart”