A few weeks ago I wrote about Gerald Seymour’s classic thriller Harry’s Game. 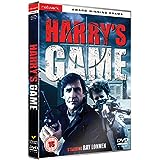 Recently we watched the television series of the book, made by Yorkshire Television in 1982 – at a time when the Troubles in Northern Ireland were still continuing.

For more about the story itself please see my previous blog.

It’s always interesting to see how a thriller is adapted for television, and Harry’s Game is more faithful to the book than most. Although some scenes were filmed around Belfast, notably in the City Centre and the Falls Road, much of the location filming was carried out near the Yorkshire TV studios in Leeds, on a housing estate scheduled for demolition.

The filming has a gritty reality. For those of us who lived through the times of the Troubles, it was uneasy seeing Saracen armoured cars on the streets again, the reconstructed riots and soldiers dashing from street corner to street corner on foot patrol.

Seymour’s book relies very much on tenseness rather than violence to make its point. The superb direction of the film series, by the admirable Lawrence Gordon Clark, provides tension by the spadeful. Even if you know the book well, the film keeps you on edge.

One reason is that it’s thankfully free of incidental music, though there is the haunting end theme by Clannad. I wish that more directors of film and television would realise the importance of silence. If you’re showing tense scenes you don’t need an intrusive studio orchestra.

Lawrence Gordon Clark made his reputation in film documentaries and this shows in the realism here.

Not having seen the series since it first aired, I was interested to see how the acting stood up over thirty years later. The film is very well cast. The late Ray Lonnen – is quite superb as Harry, giving very much a portrayal of the character in the novel. The IRA gunman Billy Downes is played by Derek Thompson, best known now for his long-running role as Charlie Fairhead in the British hospital series Casualty.

Both characters in the book are two sides of the same coin – family men as well as combatants in an miserable kind of warfare. To give this premise reality, you need two strong leads, and both Ray Lonnen and Derek Thompson are very believable.

The film series has a very strong supporting cast: Maggie Shevlin as Mrs Downes, a mother trapped in a tragic time; Gil Brailey as the woman who comes to know and understand Harry; and Tony Rohr as the IRA commander – a chilling and subtle portrait that lives in your thoughts long after the film has ended. There isn’t a poor performance in the whole series.

I seem to recall that the programme was shown over three consecutive nights on its first airing. It was later repeated as an edited down film, so if you’re buying this make sure you’re getting the original three-parter. The box set we have has a great interview with Ray Lonnen, who came across as a lovely chap.

Thirty-five years later this is British television at its best – a drama that makes you hold your breath.