Agatha Christie’s ‘Death on the Nile’

Published in 1937, Death on the Nile is one of Agatha Christie’s most famous novels, known for its intricate plot and exotic setting. Murder takes place aboard the Karnak, a luxurious Nile steamer on a week’s round-trip, sailing to Wâdi Halfa and the Second Cataract, with excursions en route to the spectacular temples of Abu Simbel. 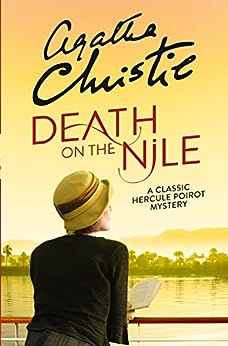 Hercule Poirot is one of the passengers, escaping from the fogs, the greyness, the monotony of the constantly falling rain of a London winter. As always, he is dressed immaculately to suit the occasion.

He wore a white silk suit, carefully pressed, and a panama hat, and carried a highly ornamental fly whisk with a sham amber handle.

The first part of the novel introduces us to most of the passengers in a series of vividly-drawn vignettes. Some scenes are quite brief, though Agatha Christie makes every word tell with her usual economy of style. The lynch-pin of the Nile journey will be Linnet Ridgeway, a young heiress and society beauty, soon to be married and visiting Egypt on her honeymoon.

Readers can be fairly sure from the start that Linnet is going to be the murder victim. We’re shown an overwhelming reason for one character to hate her and given tantalising hints that others have a strong motive to remove her. It’s interesting that the original jacket copy on the Collins facsimile edition only implies that Linnet Ridgeway will be the victim. Much better than today’s blurbs which frequently give away too much of the plot.

When the passengers are gathered at their hotel, Poirot is aware of a feeling of inexorable danger, an inevitability about what lies ahead. There are indications throughout Agatha Christie’s writing that she was intrigued by the notion of fate – perhaps due to her extensive travels in the Middle East. Her titles Appointment With Death, The Moving Finger and Postern of Fate hark back to this theme.

Christie builds the growing tension skilfully for 130 pages until the murder finally takes place. These days I seem to see a lot of reviews that complain of a slow pace in detective novels. Writing guides deem it essential to hook the reader with instant compelling action. Must be my age, because I like crime fiction where the author takes all the space they wish to show characters and setting. I really enjoy a lengthy build-up – a trademark of superb crime writers such as P.D James – and think currently fashionable style ‘rules’ are a kind of dumbing down, symptomatic of our sound-bite society.

The suspects being trapped together on the steamer, makes an interesting variation on the classic enclosed country house setting. The Karnak is large enough to have an evocative thirties’ glamour with dressing cabins, an observation saloon and smoking room, yet compact enough to feel claustrophobic. The descriptions of temple visits, the heat and passing scenery feel authentic, based as they must have been on the author’s memories.

At the half-way point, an old friend of Poirot joins the steamer for the return journey. Colonel Race assisted Poirot in Cards on the Table, published a year earlier and aids him again in the investigation. Race, a senior British agent, is on board on his own mission. A foreshadowing of the growing awareness of the coming war and the addition of enemy agents into Agatha Christie’s novels. (This reaches its height in N or M? Published in 1941).

The plot is unusually complex for Christie, with several small mysteries for Poirot to unravel along the way. Despite the tense atmosphere, Christie manages to include some quiet humour and more than one romance. Her liking for romance and happiness for young people shines through, as it does in many of her novels. It’s evident that Christie had great sympathy for youth, particularly the awkward and the over-looked.

The break-up of her marriage to Archie Christie and her life-long shyness are widely known. Even when happily settled with Max Mallowan, it’s easy to imagine Agatha Christie being the quiet people-watcher in the corner. Noticing what others miss, full of compassion and kindness, very like Hercule Poirot.

The central murder plot stands or falls, more than most, on its believable psychology. It succeeds magnificently, this is Christie’s understanding of human nature at its most acute. A brilliantly cunning plot device is one that she used in another novel – which of course, I won’t mention! Nothing wrong with authors doing a spot of recycling, especially when they trail-blazed the twists in the first place.

Death on the Nile is acclaimed as one of Agatha Christie’s greatest triumphs. I hadn’t read it since my teens and had a job to put it down. A deeply satisfying read.

7 responses to “Agatha Christie’s ‘Death on the Nile’”