Ngaio Marsh’s ‘Tied Up In Tinsel’

Tied Up In Tinsel is the twenty-seventh Roderick Alleyn mystery, published in 1972 and written when Ngaio Marsh was in her late seventies. I mention this only as there’s often a preconception that writers have their heyday and over the course of a career lasting several decades, their powers flag in their last few titles – something that’s often said about Agatha Christie. Like the majority of fans, I do prefer the earlier works of both authors for their period setting. Even so, Tied Up In Tinsel is a really good detective novel, working on every level. 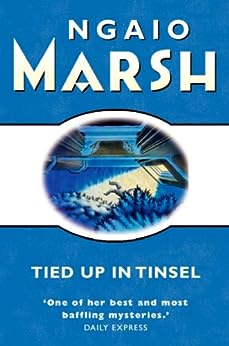 It always seems strange to me to read the late novels by a prolific author famed in the Golden Age. Here, a character mentions Steptoe and Son in passing, which seems out of place in Troy and Alleyn’s world. Though Ngaio Marsh and Christie, were – in a sense – seventies novelists too. I remember buying their last few novels when they came out.

The story begins as Troy – celebrated artist and wife of Superintendent Roderick Alleyn – is spending Christmas at an isolated country house. She’s there to paint a portrait of its owner, Hilary Bill-Tasman. (Alleyn is away on official business).

Halberds is a Tudor mansion, formerly owned by the Bill-Tasmans and recently bought back. It’s being restored by the wealthy owner after years of decay. Full of modern comfort and fine antiques, parts of the project are still in progress. Beneath Troy’s bedroom window is a ruined conservatory with a roof of broken glass. The gardens and grounds are a churned-up mess of earth, trenches and bulldozers. Grand plans are afoot for terraces, avenues and a lake. The house is on the edge of bleak moorland and its nearest neighbour descending in the valley is a prison known as The Vale.

It soon becomes clear that Halberds is no ordinary household. Hilary Bill-Tasman is attempting to turn back the clock and live in a pre-war style but there’s a strong sense of the author acknowledging the present day throughout the novel. There’s a wickedly accurate caricature of a young guest, full of contemporary slang and compulsive you knows.

All the servants at Halberds are male and every one a convicted murderer. As the host explains, you simply can’t get the staff these days!

There was something watchful and at the same time colourless in their general behaviour. They didn’t shuffle, but one almost expected them to do so. One felt that it was necessary to remark that their manner was not furtive. How far these impressions were to be attributed to hindsight and how far to immediate observation, Troy was unable to determine but she reflected that after all it was a tricky business adapting oneself to a domestic staff composed entirely of murderers.

I like the way in which Ngaio Marsh takes the evergreen trope of a country house-party murder and subverts the convention. The thought of a murderer preparing food, serving drinks and turning down the sheets is deliciously sinister. I’ve seen this same idea used in an American historical mystery written a few years ago. There’s some interesting discussion about the idea of ‘oncers’ being of a different nature than other criminals.

Troy is a delightful character, intelligent, kind, self-deprecating with a wry sense of humour. I especially enjoy the mysteries where she plays a part. As an artist, she’s a shrewd observer of the undercurrents and a great asset to Alleyn when he appears. I also like the portrayal of a happy, long-standing marriage, elegantly conveyed with sparing detail.

The other house-guests are a believably eccentric bunch, including the host’s business partner, his fiancée and endearing elderly relatives. They reminded me of Margery Allingham’s characters. Rory Alleyn and his faithful side-kick Inspector Fox are two of my favourite detectives. Alleyn is very well-developed throughout the thirty-two novels. It’s noticeable in this one that secondary characters are effectively summed up in a brief line of slight description – just as Troy is said to capture the essence of a personality in her portraits.

The murder takes a long time to happen with a series of unsettling incidents and a controlled building of tension along the way. When Alleyn takes charge, it’s absorbing to see how he sifts through the jigsaw of evidence and lies. The clues are fairly there, though hidden among some clever misdirection and the ‘reveal’ is superbly done.

The weather plays a big part in the novel. Heavy snow has fallen by Christmas Eve, transforming the landscape with its rubble and revealing any tracks. Lashing rain and high wind hamper the investigation and the wild night – shivering, drenched policemen in oilskins and gumboots contrasts with the luxurious Halberds, its stifling central heating and open fires. Tied Up In Tinsel is a great treat, perfect for crime fiction fans at Christmas.

2 responses to “Ngaio Marsh’s ‘Tied Up In Tinsel’”