‘The Vanishing Box’ by Elly Griffiths 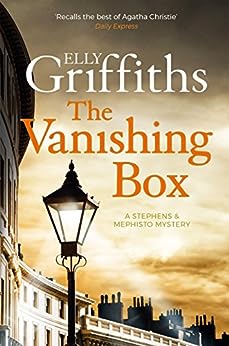 It’s December 1953, leaden skies over the sea-front, snow is falling and Max Mephisto is back in Brighton, topping the bill at the Hippodrome. Somewhat uncomfortably, he’s sharing his act with his daughter Ruby as an equal partner. Meanwhile, Edgar is investigating the unusual murder of Lily, a quiet young florist. Flowers are made a deliciously sinister motif throughout this mystery.

Lily lodged in a typical dreary boarding-house of the time. The period detail is beautifully done with female clerks giving homely touches to their cold rooms, flowered skirts on dressing-tables, cooking on gas rings, a sharp-tongued land-lady and no gentlemen callers in the house.

Among the lodgers passing through are two girls in the show with Max. They’re performing in a tableaux vivants act where scenes of famous women in history are depicted by almost nude artistes, posed like living statues. Their modesty is just about preserved by carefully arranged props and famously, huge fans made from feathers and the stage darkens as they rearrange their poses.

These acts scraped past the Lord Chamberlain’s office – the theatre censor – provided the girls didn’t move. Not so much as a twitch was allowed. The best-known example was the show at The Windmill in London’s Soho. Their tableaux were legendary for elegance, sauciness and glamour – and for continuing throughout the Blitz. Their post-war slogan was We never closed.

As Edgar’s case leads to Max’s theatrical world, a well-written plot – packed with suspects and red herrings – races to an exciting denouement. This was a fast read, the author’s prose has a lovely flow and it was hard to put down.

There’s so much I enjoy about Elly Griffiths’s Stephens & Mephisto series. In addition to her strong plotting, she’s extremely good on character and place. Her characters always feel true to life. Edgar and Max are very likeable leads, I especially like Max’s world-weary restlessness. The two sergeants Bob and Emma, with their gentle rivalry, are believable and it was interesting to see Bob get a more prominent role in The Vanishing Box.

Brighton makes a wonderful setting, almost a character in its own right and the author leads us through its real seedy streets and wealthy squares. To anyone who loves Brighton, it’s poignant to glimpse the lovely old West Pier still standing, the former Hanningtons department store and the Hippodrome as it once was. (There’s an interesting author’s note about the real travails of the theatre in the novel and thankfully, hope for its future). It’s hard to think of a more atmospheric town in England for crime fiction – and many authors would agree.

Elly Griffiths evokes post-war British society and its sense of changing times very well. There are all sorts of divides in the novel; between those affected by serving in the war and those too young like Sergeant Bob Willis, young women who work until they expect to marry and those like Emma, and Edgar’s fiancée Ruby, who want a satisfying career in a male-dominated world. There’s a sense of loss vying with a new optimism. The country’s both down at heel and on the up. While there are bombsites and war debt, there’s a new, young Queen on the throne, women are wearing Dior’s New Look and television is starting to make an impact.

I really like the theme of theatre, magic and illusion in this series. The contrast between the lure of show-biz and the shabby life backstage is superbly done. Tableaux acts are starting to feel outdated – though obviously still popular with the dirty raincoat brigade. Max disapproves of the new-style comedians who don’t tell gags with punchlines and of a new magician, a cetain Tommy Cooper, who deliberately messes up his tricks. This fading world of variety gives an outstandingly good sense of place to the series.

An historical detective novel to get lost in, The Vanishing Box would make a perfect seasonal read and a lovely last-minute Christmas present.