Published in 1937, this is Ngaio Marsh’s fourth novel and the first one set in her native New Zealand. This background adds a fascinating slant on a most British of plots – murder in the theatre – transposed to what would then have been termed life in the Dominions. 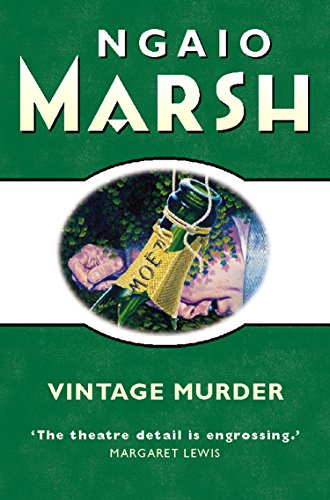 The novel begins with an impressively well-written first chapter. The suspects are introduced via one of my favourite tropes, a long-distance railway journey. Give me a steam-train travelling through the night and I’m hooked. All those possibilities for skullduggery with corridors and sleepers. The train here is particularly interesting with viewing platforms and a mountainous, switchback line.

Chief Inspector Roderick Alleyn is on holiday and trying to keep his profession under his hat. Not easy when your cases get written up in The Tatler. He’s been offered a seat in a carriage occupied by a company of actors. The Carolyn Dacres English Comedy Company are touring New Zealand and on their way to the city of Middleton in the North Island. Ngaio Marsh explains in a foreword that she was no fan of fictional towns. But New Zealand had so few sizable places, if she used Auckland or Wellington, her local characters might have been mistaken for portraits or caricatures of actual persons.

Ngaio Marsh isn’t often remembered as a great descriptive writer. It’s probably fair to generalise that Golden Age writers tended to concentrate on plot and dialogue. Setting was often scanty. Well, Marsh also concentrated on plot but one of the many reasons I love her work is because she evoked a superb sense of place. She was equally at home describing London streets, the English countryside or her homeland. This is Alleyn on the train:

A violent jerk woke him. The train had slowed down. He wiped the misty window-pane, shaded his eyes, and tried to look out into this new country. The moon had risen. He saw aching hills, stumps of burnt trees, some misty white flowering scrub, and a lonely road. It was very remote and strange. Away in front, the engine whistled. Trees, hills and road slid sideways and were gone. Three lamps travelled across the window-pane. They were off again.

Throughout the opening chapter, I liked the way that the rattling, rolling rhythm of the train journey was interspersed between dialogue, making the reader feel truly in the scene. There’s a very visual feel to the writing, probably a consequence of being a renowned theatre producer.

The murder takes place on stage after a performance. A party is held to celebrate the leading lady’s birthday and a few guests outside the company are invited. These include Alleyn and a distinguished, Maori doctor. The build-up of tension is deftly handled and the murder method is worthy of Midsomer Murders. The unusual means of dispatch, popular in pre-war mysteries, are great fun. Ngaio Marsh often went in for a flamboyant slant on the murder method, possibly influenced by Dorothy L. Sayers? And if some of these wonderful writers’ ingenious ideas wouldn’t bear too close an examination, who cares? The play’s the thing..

I love a theatrical setting, it offers so much scope for being seedy and sinister. Ngaio Marsh writes about this world with an ease that can’t be faked. She acted herself and is credited with almost single-handedly reviving the popularity of New Zealand’s theatre. Not surprising that her characters are very believable theatrical types.

Alleyn is shown to be interested in and respectful of Maori culture, almost certainly echoing Marsh’s views. (Her name – actually her middle name – translates as ‘light reflected on water’ and a ngaio is also a small tree, native to New Zealand). Dr Te Pokiha is a most sympathetic character. This is surely the author speaking through her leading man:

Mr. Liversidge added that Courtney Broadhead was a white man, a phrase that Alleyn had never cared for and of which he was heartily tired.

Rory Alleyn cuts quite a lonely figure in Vintage Murder, writing to his side-kick Inspector Fox and coming close to falling for the leading lady. Until he meets his wife Agatha Troy, he has a weakness for actresses, shown in Enter A Murderer (1935). We’re told that Alleyn’s on extended leave for three months, convalescing from a serious operation, though we don’t learn the details. He’s going to be fine as he meets Troy on his voyage home in Artists In Crime (1938).

Vintage Murder is a very enjoyable read, a classic, closed setting mystery with a freshness from its vivid New Zealand background.

I’m usually dubious about series sequels/continuations by new authors – appalled by what’s often done to Agatha Christie’s legacy. But I will try Stella Duffy’s new novel Money In The Morgue, published in March. This continues the opening chapters of an Alleyn mystery which Ngaio Marsh began and put aside in 1945. Set in New Zealand during the war – Alleyn was already there in Colour Scheme (1943) and Died In The Wool (1944) – the surviving fragment is a delight.