Peter Lovesey’s superb stand-alone, The Reaper, is an unusual take on ‘clerical crime’. It’s a novel I absolutely love and cannot recommend too highly. Although it was only published seventeen years ago, in 2000, The Reaper has much in common with certain Golden Age novels – it reminds me of Francis Iles’ work – and classic films. 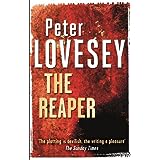 This is the story of a very unusual rector, the Reverend Otis Joy, whose parish is the rural Wiltshire village of Foxford. The novel is prefaced with a revealing quotation from Samuel Butler:

Vouchsafe O Lord, to keep us this day without being found out.

Very apt because this story isn’t a whodunit, it’s a will-they-get-away-with-it? The rector is a serial-killer.

Have faith – we try hard not to reveal spoilers and ruin anyone’s enjoyment of a novel new to them. This information is in the synopsis and we see the rector spring into action as early as page eight.

Otis Joy is young, charming and sets the female hearts aflutter among his congregation. He fills pews, delivers charismatic, actor-style sermons and throws himself into good works. Almost all the villagers think he’s by far the best rector they’ve ever had.

Peter Lovesey has great fun in taking a classic English detective novel setting and turning it on its head. All the usual suspects are here, the vicar/rector himself being a stock character from vintage crime. Only this time, he’s our anti-hero. Love interest is supplied by young, unhappily married parishioner, Rachel and her femme fatale pal, Cynthia, the Chair of the Women’s Institute. Lovesey is wickedly good at female characters, not always the case with male writers.

The plot is played out amid the village year, the summer fête, harvest supper, jumble sales and carol-singing. The villagers are rife with speculation, gossip and a touch of malice. Where does their priest disappear to, on his day off?

The rector ad libs brilliantly through the unexpected scandal of the Bishop’s unfortunate demise. However things get complicated when the parish treasurer gives up his post and an obnoxious young accountant in the confirmation class, fancies taking it on.

The scene is set for a devilishly clever, black comedy, where you really shouldn’t laugh but you do. And you really shouldn’t root for an amoral serial-killer but you do. In the same way we cheer on the marvellous Denis Price in Ealing Studios’ Kind Hearts and Coronets. The rector’s life starts to unravel in a series of Peter Lovesey’s trademark twists, with a rising body count and desperate complications.

The novel unfolds like a deliciously dark Hitchcock. Alfred would have loved this. The Reaper belongs to that very special crime genre where humour meets murder. Hard to pull off and Peter Lovesey makes it look effortless. A genre better known on screen, in a sense, The Reaper belongs with The Ladykillers, Arsenic and Old Lace, Family Plot and even Frenzy. All of them fabulous.

The pace gets ever more frantic and I suspect many writers couldn’t deliver a sufficiently punchy ending. I recall reading an interview with Peter Lovesey where he said, as a child, he wanted to be a conjuror. And in a way, he is. A master of distraction, he’s also an incredible plate-spinner, always revealing the best trick of all at the end. The denouement is dazzling and the ending unexpected, very satisfying and absolutely right. Peter Lovesey always pulls it off.