The Sherlock Holmes Book of Self-Defence – The Manly Art of Bartitsu, as used against Professor Moriarty is a fun-filled little book from the Ivy Press, based upon the original Edwardian articles and other writings of E.W. Barton-Wright, the devisor of Bartitsu. 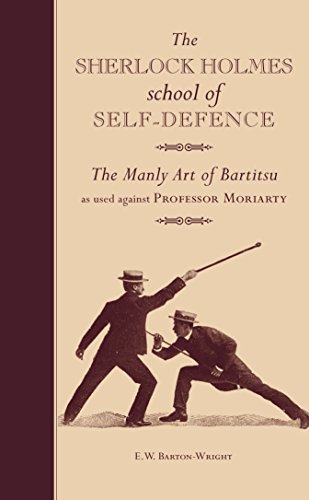 While it’s a fun read, this delightfully-illustrated little book is practical too, and you might pick up a hint or two on defending yourself.

I spent a couple of decades indulging in martial arts, including Wado Ryu Karate, Kung Fu, boxing, wrestling, Jiu-Jitsu and Savate (French kick-boxing). Elements of the later two make up much of the ethos of Bartitsu. I’ve used similar techniques in training and the real world – they do work, though you really do need to practice and not just read a book.

Contrary to popular belief, Victorian and Edwardian society was not particularly safe. There were places in town and country where you might be attacked. Personal safety did prey on people’s minds.

Barton-Wright (1860-1951) was an interesting character. He was a consulting engineer by profession, work which took him all around the world, including Japan where he took up Jiu-Jitsu. Returning to London in 1898, Barton-Wright devised the hybrid Bartitsu (named after himself), publishing magazine articles and opening a Bartitsu Club in Shaftesbury Avenue. It didn’t last long, no doubt because of competition from many other schools of many other martial arts disciplines that became popular at the same time.

It did, however, make its mark on one famous writer – Arthur Conan Doyle, creator of Sherlock Holmes. When Doyle brings Holmes back from his supposed death at the Reichenbach Falls, Holmes explains to Watson how he escaped the grip of the fiendish Professor Moriarty:

We tottered together upon the brink of the fall. I have some knowledge, however, of Baritsu, or the Japanese system of wrestling, which has more than once been very useful to me…

Notice that Doyle gets the name of the art wrong, Baritsu rather than the proper Bartitsu, though this could well have been a proofing error rather than the author’s fault. Interesting to see how widely Barton-Wright’s martial art had become known.

This present book presents us with a number of these techniques, from how to “Deal With Undesirables”, such as evicting a troublesome man from a room, to how to escape when grabbed from the rear or by the throat. There are short chapters on how to fight with a walking stick, dealing with an attacker armed with a knife, how to throw and hold an assailant on the ground, and even self-defence using a bicycle as a weapon.

All very interesting, though if you want to take this up seriously you should perhaps enrol in a club and learn hands-on.

But this little book is a delight and well worth a read for devotees of historic crime fiction.

We’ve been in York, searching out locations for the third William Quest novel. Interesting to walk around a city getting atmosphere for an historical thriller set in 1854. As an historical location, York is easier than most. Such a lot survives, compared to other places in Britain.

In the first two books The Shadow of William Quest and Deadly Quest, my hero is mostly adventuring in London – a place which has changed a great deal since the mid-Victorian period. But the Victorian elements can still be sought out even there, though they are few and far between. I’ve spent such a lot of years studying Victorian London that it seems very familiar to me. Indeed, modern London seems strange whenever I’m there.

York is a joy. Although there has been modern development and new shop fascias, many of the streets would still be recognisable to a man from 1854. In my book, William Quest has never been to York before, so he’s lost one of the great advantages he’s had while  carrying out his often dubious activities in London – which he knows like the back of his hand.

For anyone who’s never encountered William Quest, he’s a mysterious figure, usually armed with a pistol and a swordstick, who rights wrongs, defends the weak against the strong, fights corruptions and has his own occasional vigilante methods of dealing with wrongdoers.

But in this book he’s having to take on the role of detective as well, solving a puzzle that has baffled the citizens of York…

And it means peril, high adventure and a sinister conspiracy….

Having spent the past couple of months writing the third Quest (no title as yet), it’s great to revisit familiar old haunts in York – though I confess to spending a lot of time in bookshops. York has some great second-hand bookshops!

We go to York quite often and always do a lot of walking around the streets, but I felt I was at the point in the novel where I wanted to see again some of the places I’d mentioned in the chapters written so far. There is one particular street, Tanner Row, which appears in the book and which I didn’t really know at all  – an important street leading to what was once York’s original railway station. The one someone like Quest would have used in 1854.

This original railway station was within the city walls, the present station, though Victorian and magnificent is outside the walls. Much of the old station still exists, though it’s been revamped as offices for the city council.

Nearer to the Minster, we walked the streets where the mystery occurs which provides my novel with its plot – the area around Stonegate and Grape Lane. I know these streets very well, but it was valuable to stroll through them with my characters in mind. It’s the little details that make the difference when you are imagining fictional characters in a real landscape.

Most of my novels are set in real places. I often get ideas for stories by just going for a walk. The whole story-line of my 1930’s Scottish novel Balmoral Kill changed when I walked around Loch Muick in the Highlands. You could re-enact the final duel in that novel across a real landscape if you wanted.

I find as a writer that just going out for a walk is the greatest source of inspiration.

Some areas of York have changed since the 1850s. The streets known as the Water Lanes, down on the River Ouse, were a rookery at that time.  In the 1870s a new road, Clifford Street, was driven through and much of the rest redeveloped. It’s still Victorian and charming to walk through, but not quite the setting Quest would have known.

On the city walls

Much the same happened in London. Jacob’s Island, where my book Deadly Quest comes to an end, was a much viler rookery than the Water Lanes. Charles Dickens used it for the ending of Oliver Twist, where it is Fagin’s final lair. Today Jacob’s Island is full of very expensive luxury apartments. If the ghosts of the poor devils who lived in the diseased original Island could come back and see it, I do wonder what they would think?

I came back from York enthused by what I’d seen. The visit spurred me on to finish the book. I hope it will be out at the turn of the year.

Though I still don’t have a title!

If you haven’t read the first two William Quest novels, there are links below. Both are available in paperback and on Kindle – and there’s a free Kindle App available for your Smartphones if you like to read on the move.

My New Book “Villain” Out Now

As some of you know, when I’m not writing mystery stories, I write historical tales and my new one is now out. Here’s my latest…

Villain – the third in The Chronicles of Robin Hood series – is now available for pre-order on Kindle. Publication date is 30th June. The paperback is already available. Order before the publication date and you get either version discounted – the price goes up on the 30th.

Well, here’s what it’s about:

“AD 1203. Plantagenet England. A gripping historical novel and the third instalment of The Chronicles of Robin Hood. Robin of Loxley is in exile in the dark forests of the north, when a killing and a betrayal drive him back to his old battleground of Sherwood Forest.

A good man is slain and the full terror of the Sheriff of Nottingham and Sir Guy of Gisborne is unleashed. With the King in Normandy and a people’s champion dead, only warriors outside the law are there to fight for the poor and desperate.

Outnumbered and surrounded by his enemies, Robin Hood is forced into waging a murderous campaign against the forces of evil.

Fighting against overwhelming odds, the outlaws divided and with a vicious warlord attacking the people of Sherwood, can Robin Hood and just a few of his men hold back the forces of oppression?

An exciting new historical novel by the author of Loxley and Wolfshead.”

To order just click on the link to pre-order the Kindle version. Look under “Books” for the paperback.

Please do share and tell your friends. Small publishers taking on the mighty publishing empire of Rupert Murdoch need word of mouth advertising.

For more details about my historical writing do check out my other blog at http://www.johnbainbridgewriter.wordpress.com