An interview with John Bainbridge about his new Victorian thriller “The Shadow of William Quest”:

So how did William Quest come about?

I’ve always wanted to write about aspects of the Victorian underworld, but I wanted a setting that was London and Norfolk. For a long time I had this image of a gentleman carrying a swordstick walking along a London alley. I knew straight away that he was on some sort of quest for vengeance. His name, in these preliminary thoughts was Edward Stanton. Then one day the name William Quest flashed into my mind. It seemed to fit. I knew it would open with a killing but had only the vaguest ideas as to where to go from there.
So did you write out any sort of detailed plot plan?

Not really, and I’m glad I didn’t. I scribbled a few pages of very rough ideas in a Moleskine notebook. Many of these got rejected as I went on. I knew that there had to be some sort of back story for Quest. I had thoughts on what that should be. Then I sat down and it really wrote itself.
Did it come easily?

Much easier than anything I’ve ever written before. Whole characters just appeared, complete with names. I had no idea that there would be a character called Jasper Feedle at all. He just appeared one morning with that name. Walked out on to the pages, complete. Wissilcraft, the spy, was someone else who built up his part. He was meant to be a very minor character, just in a couple of scenes. And then there he is, driving the whole plot forwards.

Did you do much research?

I took a minor in nineteenth century social history as an undergraduate at the University of East Anglia. I always had a considerable interest in the Victorian underworld so I had most of that information at my fingertips. I have always had an interest in Victorian London and Norfolk and wanted a contrast between the London rookeries and the lonely countryside of Norfolk. Recent visits back to Norfolk gave me ideas for the scenes there and for the climax.

How do you work?

Mornings only! An early start and then only to lunchtimes, then the brain gives up. I usually write between 850 to 1400 words a day. I try to write every day. I really want to do more words.

Do you have a favourite character?

It has to be Jasper Feedle. Mostly because he saved me a lot of labour and came on like an actor, gave the performance, without any great effort from me.
Why the Victorian period?

When I was younger my period was always the 17th century. My university experiences and reading since diverted me to Victorian times. I think it a fascinating period. People think they know it, but…. And there are several periods within the period. The Regency attitudes linger on for a long time into Victoria’s reign. I found that fascinating and it was one reason why I set Quest as early as 1853. Much of Dickens’ work is driven by those attitudes. Worth remembering that there were thirty years of Victorianism after Dickens died. They were rather different years, much as the 1980s were different from the 1940s.

A good time to be alive?

If you were well off. Most of my ancestors were working class during Victoria’s reign. Many had unpleasant and early deaths. But there were wonderful people fighting for reform as well. I wanted to reflect both aspects in the novel. But at the end of the day it is a thriller and not a social novel. But Victorian values are not something, generally, we should wish back. Like Quest and his friends I would like a fairer and much more compassionate world.

But the relics of Victorian Britain are still there?

They are indeed. In Britain we are fortunate that we can walk down the same streets and see the same buildings as our Victorian ancestors. Walk down many High Streets, look up above modern fascias, and we can still see the buildings they would have seen. A lot of Britons still live in the same houses as the Victorians. Much of our civic architecture is Victorian. We should make sure the planners and developers leave it alone.

Will there be any more William Quest novels? 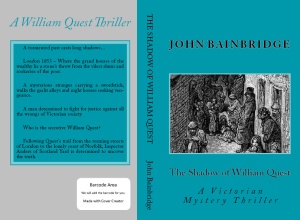 Hope so. I hope to finish another Quest novel by the end of this year, though at present I am working on an espionage novel set in the 1930s.

What advice would you give to anyone writing a Victorian thriller?

Don’t dwell too much on the plot until you have immersed yourself in the period. Sometimes the best ideas come out of that period. Read widely, walk those Victorian streets, look at their art, listen to their music, read their literature. It’s a bit like time travel. You need to be living there in a bit of your mind. Once you can get into that state the ideas should come. Better than trying to force a plot on to the period.

THE SHADOW OF WILLIAM QUEST by John Bainbridge

London 1853 – Where the grand houses of the wealthy lie a stone’s throw from the vilest slums and rookeries of the poor.

A man determined to fight for justice against all the wrongs of Victorian society.

Who is the secretive William Quest?

Following Quest’s trail from the teeming streets of London to the lonely coast of Norfolk, Inspector Anders of Scotland Yard is determined to uncover the truth.

This exciting Victorian thriller takes the reader into the sinister hinterlands of Victorian London as the hunter becomes the hunted. Then to the wild and lonely countryside of Norfolk for an exciting denouement.

A SEASIDE MOURNING  by John Bainbridge 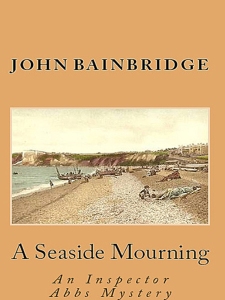 Devonshire 1873. The peaceful seaside town of Seaborough, half-forgotten on the eastern border of the county, seems an unlikely setting for a murder.

When a leading resident of the town dies, the cause of death is uncertain. Inspector Abbs and Sergeant Reeve are sent to determine whether the elderly spinster was poisoned.

Behind the Nottingham lace curtains and over the bone china tea cups trouble has been brewing. Seaborough is changing, new houses are going up and some prominent inhabitants are ambitious for the town to become a popular resort.

As one death leads to another, the detectives need to work fast to uncover the secrets beneath the surface of this respectable seaside town.

Now available as paperbacks through Amazon and Createspace and on Amazon Kindle.